The Siege of La Casita... 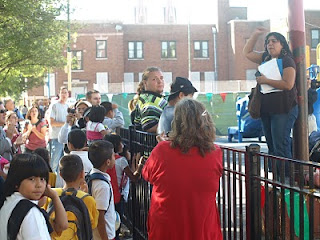 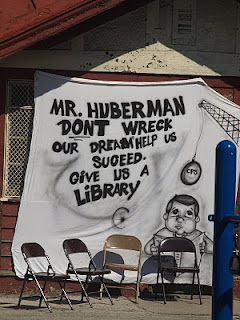 The Siege of La Casita:

The war at is far from over, but at least the most recent battle has been won. The siege of la casita, the field house which sits in ’s playground, has been lifted. Since Wednesday parents and community activists have occupied the facility to prevent its demolition by Chicago Public Schools (CPS). They want the field house protected and used, at least temporarily, as a library, a resource the school has been left without for years. They currently use the field house as a community center and a place for various activities for the children. They question CPS’s desire to spend over $300,000 on demolishing the structure rather than spend that money ensuring that the school has the resources its needs.

The struggle at is nothing new. For much of the past decade, parents and community allies have had to fight to keep the school open and than fight yet again to make the smallest of improvements in what is an overcrowded and physically deteriorated facility. Rumors have been a foot for sometime that the decision to demolish the field house is a land grab. Nearby Cristo Rey, a , has expressed in the past its interest in acquiring more land in the area for soccer fields and other purposes.

CPS contends that the field house is structurally unsound. But it is a case of the dueling building engineers. The firm hired by CPS has declared the building dangerous and recommended that it be placed off limits for any activity. The company hired by the parents and community groups found instead that the roof needed replacement but that otherwise the building was sound. Those currently occupying the building are aware that the outside of the building has seen better days, but given the overcrowded conditions at Whittier and the lack of investment in the school by CPS, they are not interested in conceding any space for demolition.

After 2 days of occupation it looked as if today the police were going to make their move. They surrounded the field house restricting any movement in or out. By mid day the perimeter of the siege had extended for a block around the school. Streets were cut off and even local residents found it nearly impossible to enter their neighborhood. Only a handful of press who we already inside when the police arrived were allowed near the field house. And most importantly, community members arriving with food for those inside were prevented from getting that food to those inside. Police commanders on the scene threatened arrest for anyone attempting to bring food to those occupying the field house. Even James Finnerty, the lawyer for those inside the field house, was prevented from entering the school grounds.

Calls to Alderman Danny Solis for his aid in lifting the siege fell on deaf years. Once again, the community was told Danny was out of town (man that guy takes a lot of vacations). This time it was to D.C. at least and not to . But other politicians proved more helpful. In particular, State Rep. Cynthia Soto tried her best to get through to Ron Huberman , the CEO of CPS (what a title, he was apparently also out of town - I wonder if he was with Danny), and pressure him to call of the cops.

The parents and community members inside told the growing crowd of supporters outside that they had been told that at 2:45 pm, just as the school day was ending and children would be exiting the school building, the police would arrest anyone who persisted in refusing to leave. But the end of the school day just brought a fresh wave of solidarity. A large group of parents, school children and community supporters pushed past police lines with food for those inside. Some started to jump the low fence that had served as the perimeter closest to the field house all day. Frustrated police at first seemed to try to prevent this but were quickly overwhelmed and gave up the attempt to stem the tide. Shortly after that, for reasons that are not fully clear, the police left the area and removed the cordon they had created around the school. CPS security than opened the gate to the playground and all the supporters, many of whom had observed from the fence line all day, swarmed in for an informal pizza party.

It is not clear what CPS next move will be. Negotiations between CPS and those in the field house were inconclusive. CPS indicated perhaps some willingness to dialogue with the concerned parents and area residents, but only if those inside vacated the building and lock smith changed the locks. CPS also put up signs on the outside of the building declaring it condemned and off limits to the public. At least for now the police have been called off, and the warriors are staying put. But the police could return at anytime so the Whittier warriors could use your solidarity.

Bring food, bring drink, but most of all bring your solidarity...

Audio interviews from those occupying La Casita and supporters outside will air on this Monday’s Labor Express Radio program, 88.7 FM at 10:00 AM. Or live online at… www.wluw.org

You can find pics of the events described here…

In memory of Rafael Gomez Nieto, the anti-fascist COVID victim two wars could not kill, on the first anniversary of his passing…

By Jerry Mead-Lucero March 31, 2021
When I was an up and coming young socialist high-school, then college student, moving gradually away from Liberation Theology, towards some form of democratic socialist-humanism, the example of the Spanish Revolution of 1936-1939 made a major impact on my thinking. I knew instinctively and without question Stalinism and Maoism had nothing to offer. How could two of the century's most brutal dictators have anything to say about creating a future free of oppression. What I was looking for was historical examples of a new stage in the movement toward full human freedom, one in which working class people were in control of their lives and their future. No bosses, no party bureaucrats, no cults of personality and increasingly, in a departure from my past, no gods. Probably the first and certainly one of the most influential works of revolutionary literature that I encountered was Orwell’s Homage to Catalonia , hence my Orwell attachment to this day. Soon following were the equall
Post a Comment
Read more