Over a thousand rally in front of Hyatt Regency in Chicago... 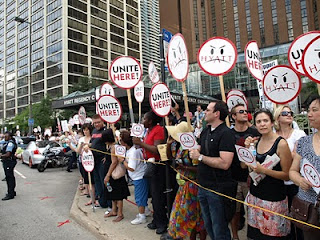 As part of a series of actions across the country, over a thousand people - hotel workers and their supporters - rallied in front of the Hyatt Regency Hotel in downtown Chicago earlier today. Around a hundred people sat down to block the street in front of the hotel. About 20 were arrested.
UNITE-HERE Local 1 organizers say this is just the beginning of a ratcheting up of actions to take place over the next few months as hotel workers reach the one year mark in their fight for a new contract at over 30 hotels in the Chicago area.
Interviews with participants in todays raly will be aired on next Monday's episode of Labor Express Radio.
Pictures from the rally can be viewed here...
http://picasaweb.google.com/jerrymeadlucero/HyattJuly22ndRallyChicago?authkey=Gv1sRgCMuJqe6XxqakMg&feat=directlink
The following is from UNITE-HERE Local 1's press release...
The rich take unfair advantage of everything . . . even a recession. Hotel workers in Chicago and across North America have endured staff cuts, reduced hours, and excessive injury rates. Chicago-based Hyatt wants to take more away and lock workers into recession contracts even as the economy rebounds.
Now, on July 22nd, thousands of hotel workers in 15 cities across North America are standing up to people like the Pritzkers who run Hyatt, one of the wealthiest and most politically influential families in America.
People like the Pritzkers who run Hyatt are taking unfair advantage: While many hotel workers live in poverty, the Pritzker family cashed out over $900 million in their sale of Hyatt shares in November 2009, and Hyatt share values climbed 65% in the six months that followed. In one stark example, Hyatt fired its entire housekeeping staff from its three Boston-area hotels and replaced them with workers from a subcontracting agency earning minimum wage.
Hyatt workers and 6,500 other hotel workers in downtown Chicago have been in contract negotiations since August of 2009. Hundreds of workers at the Hyatt Regency Chicago walked off the job in late May in protest of poor working conditions in housekeeping.

In memory of Rafael Gomez Nieto, the anti-fascist COVID victim two wars could not kill, on the first anniversary of his passing…

By Jerry Mead-Lucero March 31, 2021
When I was an up and coming young socialist high-school, then college student, moving gradually away from Liberation Theology, towards some form of democratic socialist-humanism, the example of the Spanish Revolution of 1936-1939 made a major impact on my thinking. I knew instinctively and without question Stalinism and Maoism had nothing to offer. How could two of the century's most brutal dictators have anything to say about creating a future free of oppression. What I was looking for was historical examples of a new stage in the movement toward full human freedom, one in which working class people were in control of their lives and their future. No bosses, no party bureaucrats, no cults of personality and increasingly, in a departure from my past, no gods. Probably the first and certainly one of the most influential works of revolutionary literature that I encountered was Orwell’s Homage to Catalonia , hence my Orwell attachment to this day. Soon following were the equall
Post a Comment
Read more