Mainstream media ignores and lies about events of Mayday 2008... 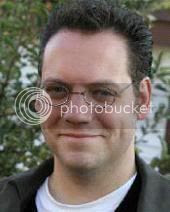 By Jerry Mead-Lucero May 03, 2008
By any objective measure, Mayday 2008 was an historic event. Not only did tens of thousands of immigrant rights activists take to the streets from Detroit to Chicago to LA, to demand legalization for all, but 25,000 dock workers on West Coast shut down West Coast ports for an entire day, to protest the ongoing war in Iraq! Rare are the moments in our nation’s history when so many working people take simultaneous actions demanding justice. And how does the mainstream media respond? With silence and lies.

Since I began hosting Labor Express Radio four years ago, I have become increasingly aware of the importance of alternative news sources. But few incidents in the past four years have demonstrated more blatantly the bankruptcy of our corporate media. Go to the Google News search page, where you can search all the news articles from all the mainstream print news sources in one place. You can find it here…
http://news.google.com/

Type in any of the following searches - ILWU, Dock Workers, Mayday – and see how many references you find to the one day strike that shut down the West Coast ports on Mayday. 25,000 DOCK WORKERS SHUT DOWN THE WEST COAST PORTS – A CHOKE POINT FOR THE ENTIRE U.S. ECONOMY - AND THE MAINSTREAM MEDIA SAYS NOTHING!

Ok, so must of us involved in any social movement for any length of time are already familiar with the media’s silence on important social issues and events of importance in variety of justice struggles. Choices must be made about what can and will be covered and what will not. Clearly the 10th article on the Obama/Clinton debate about a possible Summer gas tax shell game and the Tom Cruise appearance on the Oprah show are more essential news items that trump space that could have been devoted to covering one of the only political strikes in our nation’s history. But most media outlets claim to that accuracy is a primary journalistic principal guiding their work. So how does one explain reports like this one from Reuters, one of the primary news feeds for the entire country…

“A march in Chicago drew only about 2,000 people along the same route into downtown that attracted tens of thousands in the past two years.” Who is Andrew Stern, the Reuters reporter who is credited in the piece for the contribution on the Chicago action? Should we inform Reuters that he apparently filed this report from a some bar room in the Suburbs or in his pajamas while watching Fox News from his bed in his Lincoln Park condo. He clearly was not any where near the march that filled up a mile of Jackson Blvd. on May 1st. Here are a couple photos from about mid point in the march as the marchers crossed the intersections of Jackson and Canal… 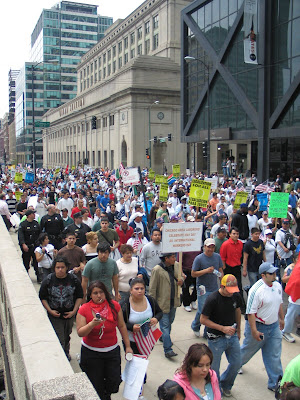 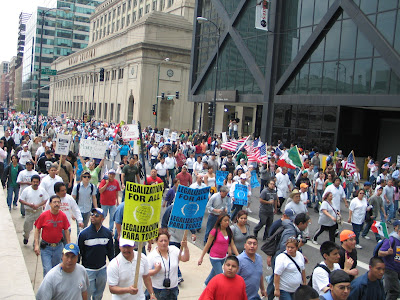 The march at this point stretches from roughly Clark at the front end, to well past the turn at Des Plaines and Jackson (somewhere near DesPlaines and Madison or Washington would be my guess from talking to individuals toward the back of the march) at the back end, with plenty of stragglers behind that – a stretch of over 10 city blocks. I stayed in this location for about 20 minutes as the front of the march passed and re-joined the marchers after roughly two thirds of the crowd had passed.

When the marchers reached Federal Plaza, about half the marchers were prevented from entering the Plaza itself by police as the Plaza had become overcrowded. The crowds were prevented from entering most of the streets around the Plaza as well, so much of the crowd stretched for blocks along Jackson and surrounding streets as the main speeches were delivered in the Plaza. I ask anyone even slightly familiar with Chicago how this could be characterized as a crowd of “only 2,000” (Andrew Stern, you might want to get out a Chicago map – I realize all these street names are probably foreign to you). Even police estimates, which are historically low, estimated numbers three times that. The more honest and realistic reports I have read gave estimates of between 15,000 and 30,000. I am a terrible crowd number estimator. The only scientific method to accomplish this task is through aerial photography, and so I general avoid the whole numbers game thing. But based on attending Chicago marches and Federal Plaza rallies for the past 20 years, I think a 20,000 person estimate would be a reasonable number.

Regardless of whether the crowd was 10,000 or 30,000, the turn out last Thursday was the 3rd largest turnout for a Mayday march in at least the last 50 years of Chicago’s history. International worker’s day, born in Chicago with the events of 1886, was nearly forgotten in the city of its birth, for most of the past 122 years. For three years running, the immigrant rights movement has resurrected Mayday and recaptured the memory of our own history. It looks as if Mayday has come back to stay. But this was not the story reported in the mainstream press this Thursday and Friday. Instead the message repeated in almost every newspaper story and television news cast was the immigrant rights movement is in crisis and decline; that the movement has lost momentum. Never mind that tens of thousands who took a day off work to demand legalization for all despite the climate of fear created in the last year by what some estimates conclude is a 40% spike in workplace raids by ICE. Never mind that African-American organizations and individuals showed a greater level of solidarity with immigrant workers than ever before this Mayday (Operation Push was one of the main organizers of the Chicago march). Never mind that hundreds of thousands of new voters have been registered by the movement in recent months, and the media has at least acknowledged the Latino vote is likely to be pivotal this year. All that is conveniently forgotten and ignored by the mainstream press. Almost as if to blatantly to demonstrate a pro-xenophobic bias, the mainstream media’s message seems to be 2006 was a fluke and the new civil rights movement launched that year can now largely be dismissed.

But the lesson of this for us in the movement is not simply that we must take seriously our promotion of alternative forms of media, as important as that it is. It is also a kick in the pants to remind us all that there is serious and essential work that needs to be done yesterday. Pro-immigrant, immigration reform will not come about because of a couple of historically massive marches. It will not come about by electing Democrats (or even Greens for that matter). It will only be won through consistent and constant public pressure from the masses in the form of increasingly powerful and creative direct actions. The mainstream press of the 1950’s and 60’s was often just as dismissive of the civil rights movement of that era. The ruling class is always ready to repeat the message that street level democracy – protests, marches, rallies, etc. – are a waste of time and accomplish nothing. They are only forced to coincide to the power of a social movement when that movement keeps up the pressure long enough and bold enough so that the masses can no longer be ignored.

So congratulations on another successful Mayday to all. But now its time to get back to work.

For more on Mayday 2008 see my last two posts below▼

By Jerry Mead-Lucero February 23, 2012
UE workers are again occupying at 1333 N Hickory "Serious Materials" formerly "Republic Window and Door". According to former UE officer and journalist Mike Elk, they are demanding that rather than laying off workers the factory be sold to a company that can keep people on, or be turned over to the workers as a cooperative. Need people to turn out to support them NOW!
1 comment
Read more